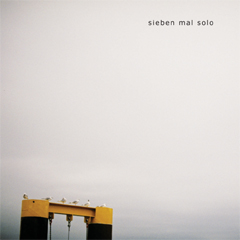 This is one of the best "various artists" album that I came across in recent times; tracks that might be classified as under average are absent, several of them being quite beautiful instead.
Touching Extremes (Italy)

In June 2007, schraum invited seven musicians to perform solosets before a very interested audience. Dave Bennett (Ogrephonique/ Berlin), Lars Scherzberg (Alto Saxophone/ Hamburg), Axel Haller (Electric Bass/ Berlin), Paul Hubweber (Trombone/ Cologne), Ute Völker (Accordion/ Wuppertal), Sabine Vogel (Bass Flute, Electronics and Tape/ Potsdam) and Christian Marien (Drums/ Berlin) present seven different ways of creating a ten minute solo. The audience experienced a broad variety of performance practice and extended technique: some instruments primarily acoustic in nature, some electronically amplified, processed and mutated and some interestingly diverse objects used in an ogrephonique way. The intimate atmosphere during the recording-sessions was enjoyed by schraum and the musicians and allowed for everybody to get to know each other and exchange ideas and talk about music and art. On both nights, the group ate and drank together in the performance space, which brought a sense of coming together and a defining of the space for themselves, both collectively and singularly. This aspect of the project can be heard in every piece, if you listen closely enough.