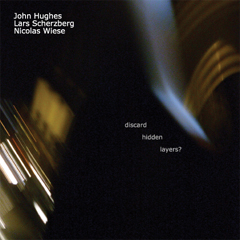 Discard's sonic coloration is wide enough to encompass not only waveforms from the cosmos, but synthetic landscaping that suggests both the ocean and solid land.
Jazzword (Canada)

Discard hidden layers? is what photoshop asks when you´re about to unwittingly delete invisible picture-layers. One may ask what this conotation has in common with the music of Hughes/Scherzberg/Wiese. Listening to the album, it is easy to understand that they are in fact dealing with quite some many layers of sound information, directly or abstractly. A trio based in Hamburg and Berlin, John Hughes, Lars Scherzberg and Nicolas Wiese have played together for three years now. A very specific group sound has emerged, as well as an optimised technical approach, out of their necessity to find a common language between acoustic and electronic information. The acoustic material that Nicolas Wiese recycles on the computer is exclusively what he records from Lars Scherzberg and John Hughes during the show. While improvising on their instruments they are constantly confronted with their electronically alienated reflections. The trio drives this layer game even further on this album - it's not just a live recording - but a much deeper reflection of their system: instrumental improvisations, information processing, recording practice. In supplemental compositions comprised from selected trio-pieces, Wiese focuses on single aspects of the material; akin to using an acoustic magnifying glass. 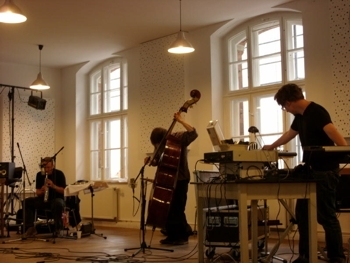