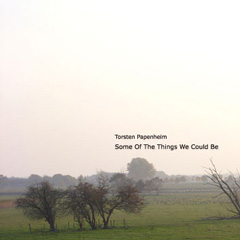 Torsten Papenheim: Some Of The Things We Could Be

Right after the second one the record's unique temperament is identifiable.
Brain Dead Eternity (Italy)

The thirteen musicians heard on this new schraum release were invited by Torsten Papenheim and producer Dave Bennett separately, or in small ensembles to the studio, living room or even a stairwell to record the music of Some of the things we could be. The musicians didn´t have a clue of how exactly the pieces would be like in the end  there were many overdubs and the process of recording took over eight months. The twelve compositions on Some Of The Things We Could Be play with the contrast and harmonies of melody and noise, effectively creating pieces of avantgarde folk music and noisejazz collages. Torsten Papenheim assembles these interesting differences very thoughtfully into pieces of chambermusic, openly arranged jazztunes, Moscow field recordings and tapedeck feedbacks. Somewhat romantic wind sections follow manipulated mini disc tracks and rough banjo patterns interfere with detuned pianos. Certain motives points to the colourful pool of impressions, shapes, styles and techniques of the musicians who played on the album.